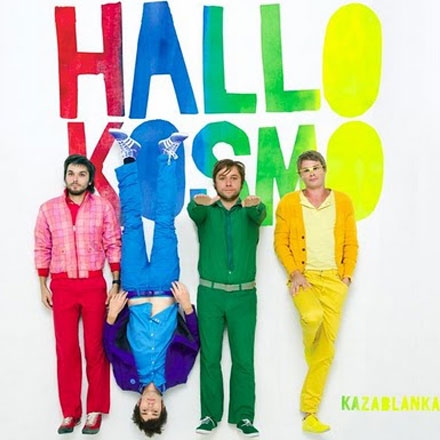 2 years ago, Daniel released a debut album titled Autobahn Hotel, produced on his very own with the help of a laptop during Girls in Hawaii european tour, this record was a collection of electronic psychedelic songs in German (Daniel comes from Eupen, Belgium and is one of the 60,000 german speaking Belgians). It sounded like something between DAF and Why?.

Daniel had to show what HK was about live, so Daniel surrounded himself with other friend musicians as he didn’t want his show to be some kind of karaoke. All of a sudden Daniel’s songs sounded very dancy and in your face thanks to this new line-up. Hallo Kosmo opened for Saul Williams in France and performed at the Nachten festival in Antwerp, Nuits Botanique in Brussels before T Raumschmiere or at Dour festival and the crowd was always impressed by the power of  this electro-rock engine. At the end of the tour Daniel knew for sure that he wanted to record the next one with this band.

In the meantime  Girls in Hawaii released its 2nd album and Daniel was on tour with them again, so he... right! ... started to record new demos for a new Hallo Kosmo album. After the girls’ tour, Daniel gathered Denis Wielemans (Girls in Hawaii), Fabrice Detry (Austinlace) and François Gustin (ex-Tellers and Kingfisherg) to practice and arrange what was to become Kazablanka.

Four young men in search of pop. Bits of dancy electro, bits of melodic electricity, bits of acoustic melancholy, and if possible all of that at the same time, a beautiful mess!

Recorded and mixed in the summer of 2009 at Girls’ Headquarter in a Brussels Park by Julien Paschal, some tracks like Rockpolizei and Every Line were mixed by Dan Lacksman (of Telex’ fame), the piano on the Old Friend is played by their friend An Pierlé.