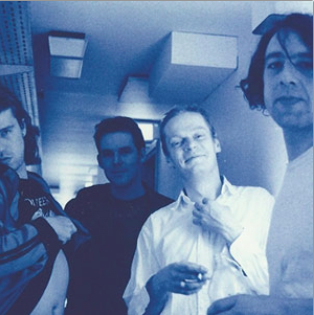 In the mid 90's - 1990's - following the success story of dEUS and its first album Worst Case Scenario a lot of new interesting bands were born, Evil Superstars, Soulwax and ... Mad Dog Loose...

But what happened to them, Mauro Pawlovski is now playing with dEUS, the Dewaele brothers have given birth to their 2many djs and Mad Dog Loose has totally disappeared from the scene.

Let's look back at the genesis of this band.

Originally, Mad Dog Loose was formed by Alain Allaeys, a photography assistant based in Ghent. Alain surrounded himself with a Brussels-based multi-instrumentalist named Nico Mansy. A few songs were recorded on 8 tracks in a small studio and the tapes reached the ears of the newly formed 62 TV records, which teamed up with Bang (the label of dEUS) to release a Laser Advice EP in 1995, which featured an ultra dirty song with a whistling intro via a distortion pedal, Shiny Side, which became a real indie hit on StuBru. French radio stations chose to program Laser Advice instead, which was more... radio friendly.

Very soon, Nico Mansy left Belgium for the United States and Allaeys surrounded himself with 3 new musicians, Armand Bourgoignie (Milk The Bishop) on bass, Bernard Plouvier (Woodentrucks) on drums and violin and Kurt Vanpeteghem on guitar.

It was then time to think about an album, the band decided to work with Vermeersch and Vervloesem, producers of dEUS' Worst Case Scenario...

When Material Sunset was released in 1996, it was very well received by the press, and the first single Versa with a Rachmaninovian piano gimmick, played by the mother of the drummer-violinist, won over the radio stations in both the north and south of the country.

The band played a lot in Belgium, the Netherlands, France, Germany, London and was also invited to the CMJ festival in New York.

Another single from the album, Take Me Down, also made its way onto the airwaves.

One morning in 1997, Alain Allaeys, unhappy with the mounting pressure and becoming a little paranoid, unilaterally decided to dissolve Mad Dog Loose, discussions would do nothing, his decision was irrevocable. Alain disappeared from the music scene and shortly afterwards underwent a serious open heart surgery and returned to live in Ypres.

In the meantime, the other 3 Mad Dog Loose continued to make music, Armand produced A Different Beat, the first 45t of Das Pop and was Paul Mac Cartney in Not The Beatles, Bernard released 5 solo albums under the name Be Plouvier, accompanied Robin Proper-Sheppard and Sophia on Hammond organ on stage and produced the music for Patar and Aubier's Panique au Village, Kurt put together two short-lived bands the Plastic Fish Factory & the Sticky Monsters and later joined the Ghent garage rock band the Mudgang.

A year ago, Alain called the other Mad Dog Loose and proposed a meeting, they accepted, except Kurt who said sorry, without me!

After a few rehearsals, the three Mad Dog Loose composed new songs and went to record them in the Ardennes. The result? Signs From The Lighthouse, more acoustic than their first recordings, but the Mad Dog Loose touch is definitely still there.

And as Mad Dog Loose has always suffered from comparisons with dEUS, let's add another layer...

An excellent blues pop, as Rudy Trouvé said so well...

Signs From The Lighthouse