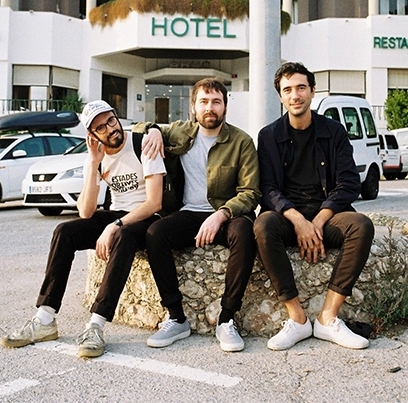 Mujeres ?Almost 10 years of career, tons of concerts in Europe and the USA, four albums...  One of the most outstanding bands of the Spanish independent scene,
the one that has been the most programmed in Primavera Festival...
"Un Sentimiento Importante" is about the friendship that binds the members of this garage punk trio.The cover shows a scorpion on the map of Spain.
An important feeling is making sardine sandwiches on the hood of your car at a gas station in Bujaraloz, with a bank card as your only knife.  An important feeling is when your father dies on the eve of a European tour and the first beer to mourn him is drunk with your band mates. A great feeling is playing in front of seven people and having fun as if they were a thousand. An important feeling is to play three afternoon concerts at the Primavera Festival.
A great feeling is being arrested at the New York airport, having your van broken into while you eat a dollar slice of pizza, landing in Vancouver and being barred from entering the U.S. while the rest of us are still being grilled by immigration.
Last summer, Martí left the group.We knew each other since we were kids, we learned to play together and suddenly we wonder what this band brings us, it doesn't bring us money but a lot of emotions.  This album is all the good and bad things that have happened since our first concerts, when everything started and we were young and stupid, now we are already almost nostalgic, explains Yago Alcover.
The result is a solid collection of garage punk hits in Spanish, a cross between Los Saicos, Thee Oh Sees and Los Cheyennes, about what
what's left and what's missing, of those who tear each other apart or unite.
The single, "Un Sentimiento Importante" is, as they say, "la slow, la bonita"... a ballad in the form of an anthem, with lyrics about love, friendship.
"Un Sentimiento Importante" (62 TV records) is the new album of Mujeres, the first one sung totally in Spanish.