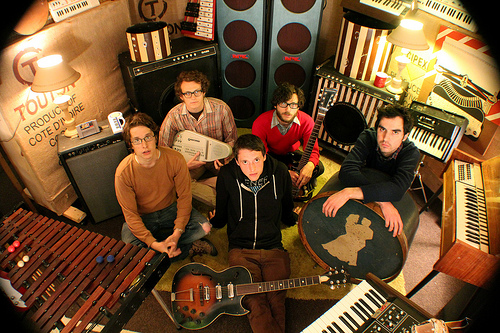 After spending the last few years building and installing a coffee machine in their new studio, the Spinto Band presents their latest, "Shy Pursuit" produced in their HQ, the "Garden Center", home of their label Spintonic Records, because the Spinto Band took things in hand and this Shy Pursuit is a solid leap forward, they took the time and this album is really theirs, they just want to share it with you!

It all started when a bunch of teenagers were labeling tapes mixed on a 4-track in a garage. A few years later we find these same teenagers, now young men, in their Garden Center, labeling this time LPs mixed with a digital recording program, the garage is theirs now and they have set it up to their taste by recycling equipment from university labs, rummaging on ebay and poking around in the back stores of Wilmington. Writing, producing, and mixing at the Garden Center allowed them to create an album with one idea in mind, their own. Shy Pursuit is the result of their mad scientist approach where anything is possible, countless guitar overdubs, the most unlikely Casio sounds, amps built or modified for just a few takes, a guest on pedal steel guitar, bass clarinet, and most importantly, vocal harmonies, not to mention their legendary coffee-boosted Nintendo parts!

Each song on Shy Pursuit is meant to be a little exploration, each melody is handcrafted, each rhythm is sculpted to a single. "Take It" was born out of an exercise in a Thriller-like beat where synths accompany a chamber orchestra.

In short, a series of songs of which the Spinto Band is very proud of.